How trees make our cities livable

The UN estimates that by 2050 about 70 % of the world’s population will be living in cities. With high population density and high energy consumption, cities also produce most of the pollution in the world. This pollution translates to material, light, sound and air pollution too.

Due to the lack of green surfaces, cities have become hot spots during heatwaves and unbearable to especially to their most vulnerable inhabitants. Many surfaces in the cities are impermeable, which causes problems in different areas. Stone, cement, and concrete all take up and hold a lot of heat as opposed to permeable surfaces that tend to also contain some moisture in them. Due to the moisture, they heat up slower.

Heat island effect refers to an urban or metropolitan area that is significantly warmer than its surrounding rural areas. This phenomenon is clearest during the summer and winter. The main cause of the urban heat island effect is caused by the land surfaces that have been converted from natural to paved. Waste heat generated by energy usage also contributes to heat island effect.

Planting shrubs, grass and trees can lower surface and air temperatures in the city through evapotranspiration and the shade provided by trees. 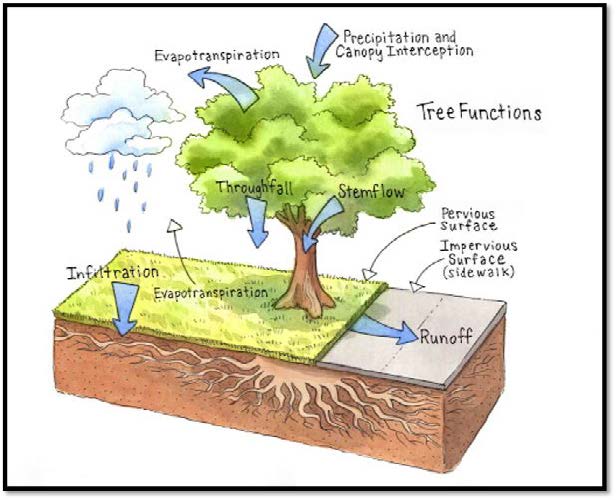 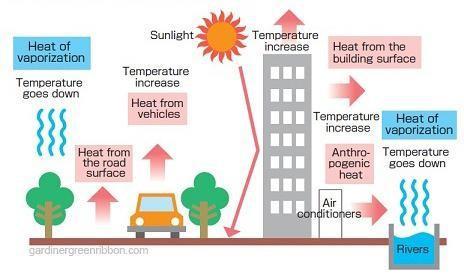 Evapotranspiration means evaporation and plant transpiration of humidity to the atmosphere from the leaves of plants. This way trees and vegetation can be used as a mitigation strategy to fight excess heat in the city, for example around buildings or to shade pavement in parking lots and on streets. Planting deciduous trees or vines to the side of the building mostly in the sun can also help to cool a building. This natural air cooler reduces energy usage that would be needed for air conditioning. It also reduces the need for energy use, improves air quality and lowers greenhouse gas emissions.

INTERCEPTION – Rain falls on the tree’s leaves, branches and trunk. The trunk being absorbs this to some extent and evaporates some of it into the atmosphere. The rest falls through to the ground, but slower than it would otherwise helping to reduce “peak flows” during heavy rain. It mitigates soil erosion.

INFILTRATION – Water that falls through the tree canopy (i.e the highest branches of the tree) soaks into the ground and gets absorbed by the tree’s roots. Trees make it possible for the soil to store even more stormwater, as the trees roots soak up the water. As the roots grow, they break up compacted soil, which allows water to more easily move downward into the groundwater table.

TRANSPIRATION – The tree uses water out of the ground as fuel for photosynthesis. Then it releases it back into the atmosphere as water vapor. This helps to cool the air and reduce high temperatures in the summer.

EVAPORATION – Water evaporates, i e moves back into the air from sources such as the soil, canopy interception, and waterbodies.

EVAPOTRANSPIRATION – i.e. the sum of evaporation and plant transpiration from land and water surfaces to the atmosphere.

Ecosystem services of a tree

Water cycle in the city

Mature trees in the city

Air quality in a green city

Dr Forest at your service

Colours of the forest

Look into the future food forests