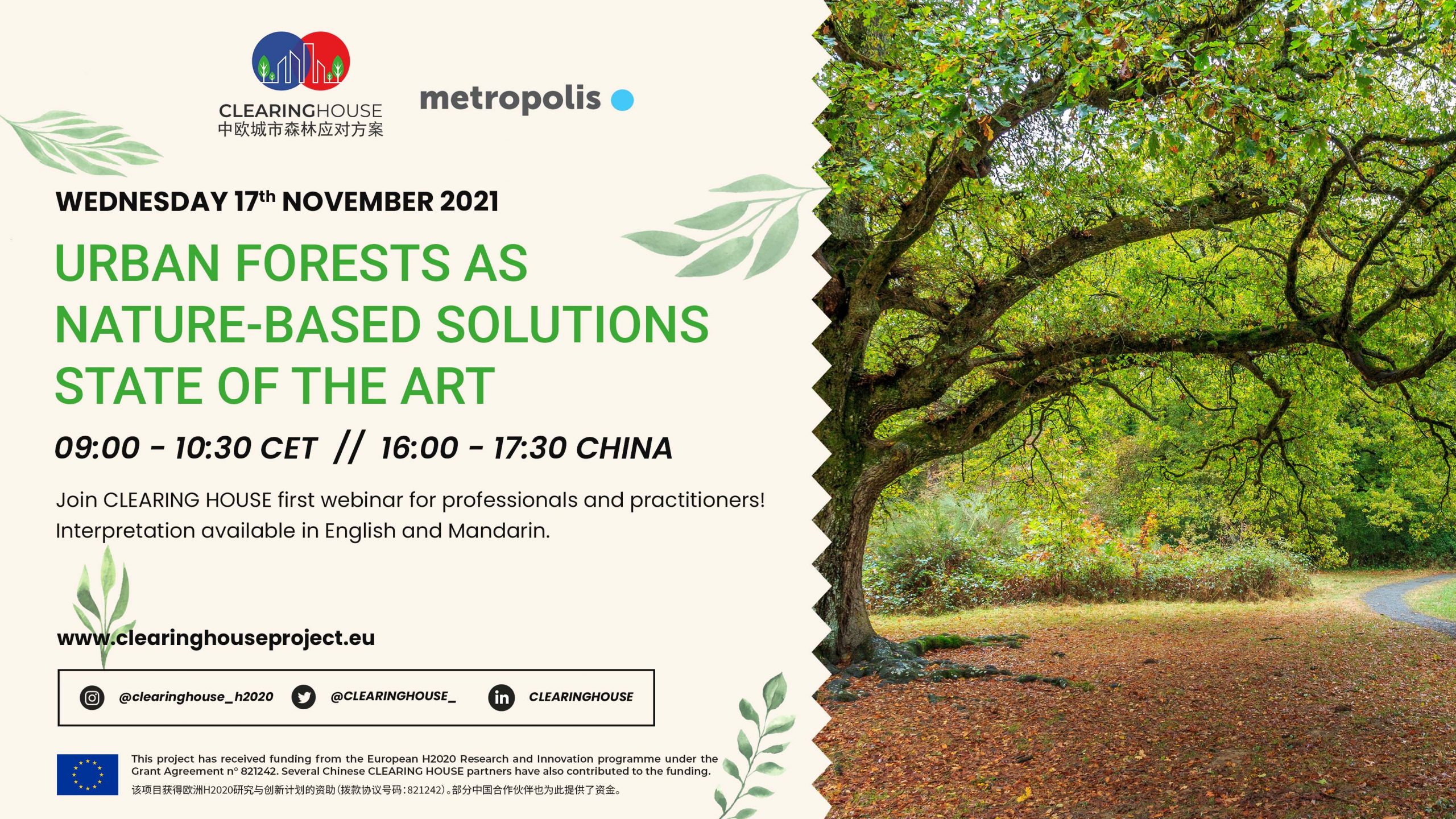 First Webinar wrap up – Urban Forests as Nature-Based Solutions, State of the art

“One of the objective of the EU Green Deal is to have 3 billions more trees in Europe by 2030, and this will partly be accomplished by implementing sustainable Urban Forests Nature-Based Solutions strategies” shared Sofie Vandewoestijne, project advisor at the European Commission’s Research Executive Agency, recalling the European Commission supports projects such as CLEARING HOUSE.

On November 17th October, we organised the first webinar of a serie of six CLEARING HOUSE webinars, aimed at providing knowledge insights showcasing results from the project. The main aim of this first webinar event was to promote research findings on Urban Forest Nature-Based Solutions (UF-NBS) that had been undertaken during the first stage of CLEARING HOUSE.

Sebastien Scheuer, from the Humboldt University of Berlin presented the findings of the identification and mapping of UF-NBS for Europe and China, as well as the development of an associated typology. The results are available at the end of this article.

A review of current UF-NBS practices in Europe and China was presented by Yole DeBellis from UNIBA. It showed that similarities are greater than the differences in the approach to UF-NBS between China and Europe. However, the scale of those approaches differs considerably, with greater large-scale afforestation in China, and larger investments are being allocated in Chinese cities for large-scale projects related to restoration (e.g., rivers, brownfields, degraded lands). Public health, human well-being and biodiversity conservation are common challenges between Europe and China and both regions highly value the social component that UF-NBS represents for urban regeneration.

The results of surveys on the societal perceptions and demands regarding forest ecosystem services (FES) in Europe and China have been presented by CLEARING HOUSE coordinator, Dr. Rik de Vreese. Those surveys, made on a focus group of 3000+ persons in Europe and 7000+ in China, showed that demand towards FES were regionally diverse within Europe, a similar result was found within the 18 provinces in China from which participants were from. Similarities between Europe and China were also found regarding the fact that higher demand for regulating and cultural FES in comparison to provisioning FES were asked by the participants. However, the survey in China showed that FES has stronger differences between types of forest wanted, and the place of residence compared to the gender.

Finally, an analysis of governance, institutional and economic frameworks in Europe and China presented by European Forest Institute researcher, Agata Konczal, highlighted the strong role of the local governments in Europe and China in the UF-NBS management. Differences in fundings schemes for UF-NBS were introduced. In Europe, most funding is done through municipalities and EU funding, while in China it is from the public sector at the national level, with implementation made via state-owned companies. However, for both Europe and China, funding is mostly limited over the duration of the project, stopping once the project is finalized. There is a need to develop long-term income sources to secure the benefits of UF-NBS. In doing so, it will be necessary to develop innovative public-private collaboration.