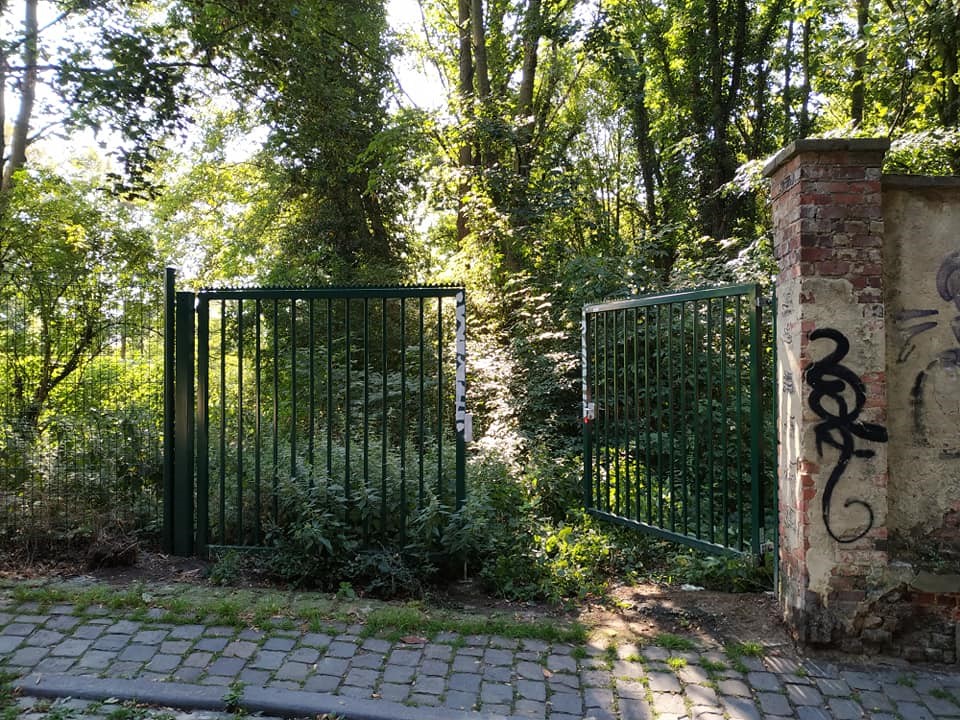 On July fourth I participated on a day of community gardening at the Parc Raspail: together with some 15 neighbours and friends we spent the day inside of this green spot in the south of the region, collecting garbage, clearing the paths from nettles and wild branches, opening some spaces for picnics and games, and letting some other wild to allow nature to remain undisturbed. That day is the last step of a journey of almost two years where neighbourhood residents joined hand to make their parc again available to everyone.

The Parc Raspail is a green area of about half hectare in the south of the Brussels Capital Region. It is named after François-Vincent Raspail, a French naturalist and politician who lived in the mansion to which the park belonged at the time he was political refugee in Belgium. The Park became public in the 1960s and later listed as cultural and natural heritage. Following a failed attempt to build on it and to privatize it, and controversies over the responsibility to manage it, the parc was not maintained anymore. Nature took over the paths and the benches, ill-intentioned passers-by used it to illegally dump their rubbish, and even abandon a dying person. In 2016, the municipality eventually decided to acquire the park on a long lease, promised to renovate it, and completely fenced it in the meantime.

Even if the neighborhood is relatively green because of the numerous of private gardens and tree-lined streets, the Parc Raspail is the only public green space in the area. I found out about it when I was doing my first researches for the CLEARING HOUSE project: and I was very surprised (and incredulous) to see on the GIS data that there was a park I did not know about just a few hundred meters from the apartment I had recently moved into.

I started to talk to my friends and neighbors and took contact with the deputy mayor to ask how it was possible that such a treasure was left in that poor state, and whether we could do something about that. At the beginning, I’ll admit, I met some reluctance. But then the COVID19 pandemic exploded, governments implemented all sorts of the sanitary restrictions, and we all (re)discovered the importance of green spaces. It was in that context that I eventually obtained the keys to the park, and together with the neighborhood committee organized some exploratory walks and a day of community gardening and cleaning.

The park was a real jungle: using an old map and our common sense, we traced some possible paths which we cleared throughout the day, we cut traversing branches and removed the nettles, we built rudimentary fences to guide the visitors. We also collected a dozen bags of rubbish, beer cans, nappies, boxes, a school bag, old furniture… The task was enormous, and we could only begin it, but on July 25, the Parc Raspail was eventually open!

In the last year the parc became a place of encounter for the residents. I saw children playing and building their huts, joggers running around, people of all age walking their dogs and enjoying the shade. The municipality was happy with the experience, and granted some minimum maintenance and surveillance. Local schools used for outdoor activities, and a local library organized book readings in the woods. We organized a few guided tours to learn the history of the parc and the neighborhood, as well as biodiversity monitoring together with local CBOs. With the summer coming, and the sanitary restriction being slowly eased, the local neighborhood committee (le Collectif des Riverains de Uccle Centre, of which I am member) organized another day of community gardening as part of a series of activities for the residents.

In the meantime, the municipality has also budgeted 2 million euros to renovate the park and has started to draw the plans. From the discussion with the neighbors, but also from my work at CLEARING HOUSE, I feel that there are three points that should be taken as a priority:

Finding the right balance between ecosystem protection, heritage enhancement and citizen participation involves many considerations, and it never happens by itself. Overall, it requires a willingness to experiment and to take the less travelled paths. I am aware of course that this is only a small green spot on the map of Brussels, but why not make it a ground for experimentation and innovation?

This article is based on an article written by Nicola da Schio and Michel Derville and published on the magazine of the local association of neighborhood committees (ACQU, www.acqu.be) [text in French]